Convergent Technologies is proud to say that Make-A-Wish South Carolina brought in the summer in such a beautiful way by hosting Wishes in Bloom  at the Magnolia Plantations & Gardens. As sponsor, we love to brag on this organization for the joy they bring into our community by granting life changing wishes to children battling critical illnesses.

The evening consisted of an unforgettable garden party where guests enjoyed cocktails and live music while bidding on auction items. To continue granting wishes for children, guests placed special bids on high-end items. The rest of the night consisted of attendees enjoying fine dining by some of the best chefs in the Lowcountry and dancing the night away!

We are excited to share with you that Wishes in Bloom  raised a record amount of more $170,000. With the funds raised, Make-A-Wish South Carolina will be able to grant over twenty-two wishes to children battling life-threatening conditions. As a community, we are grateful for the partners who believe in the Make-A-Wish mission and the unconditional support that enables them to change the lives of local wish kids.

With many events coming up this weekend, we cannot forget about Wishes in Bloom! This event is held to benefit the Make-A-Wish South Carolina organization. The unforgettable garden party takes place at Magnolia Plantations & Gardens where attendees celebrate the strength, hope, and joy created by a wish granted and help raise funds for more wish kids. Last year, Wishes in Bloom raised a record amount–over $95,000. These funds helped grant more than a dozen wishes for children battling life-threatening illnesses.

Last year’s event began around a beautiful scenic garden as guests enjoyed cocktails and live music. Throughout the evening, they placed bids on auction items, savored dishes from Charleston’s top chefs, and heard stories from kids whose wishes had been granted.

Convergent Technology is a proud sponsor of Make-A-Wish South Carolina. As a company, we support their mission to make every eligible child’s wish come true. Research has shown that a wish being granted can positively impact the rest of a child’s treatment journey. Emotionally and physically, this renewed strength aids in the fight against their critical illnesses. With over 200 wishes granted last year through Make-A-Wish South Carolina, we are excited to see the significant joy and impact they bring into our communities and families this year.

Make-A-Wish is a non-profit organization that grants wishes to children battling critical illnesses. This foundation allows each wish kid and their families to regain hope, strength, and joy as they face the future. As a sponsor of Make-A-Wish South Carolina this organization is held near and dear to the hearts of the Convergent Technology family. With over 200 wishes granted last year, we truly know how much this foundation brings communities together and impacts the lives of everyone involved. If interested in helping us in moving this mission forward, here is a link for donations.

We are excited to bring in the summer by supporting the Make-A-Wish Wishes in Bloom  event. The garden party is held in Charleston, South Carolina at the Magnolia Plantation & Gardens. A memorable night where the Lowcountry unites to raise awareness for the Make-A-Wish South Carolina mission.  This evening is in celebration of the strength and healing that comes from a wish granted and helps raise funds for more wish kids.

Yesterday afternoon, the Clemson Police Department held their 25th Annual Golf Tournament at the Boscobel Golf Course in Pendleton, SC. This tournament had twenty-eight participants in groups of four and the winning team, “Batemania”, included: Derrik Henderson, Kyle Turner, Johnny Pope, and Scott Dancy. The tournament was sponsored by the Bateman Law Firm and helped raise money to benefit the Clemson Police Department’s charities. Glad our friends at the firm took home a win! #BATEMANIA

If you’ve never attended a TEDx Greenville event, allow us to talk it up for a minute. It’s a day-long program of polished, yet unpretentious speakers—some from across the country, some from right here in the Upstate. Not convinced yet? These aren’t the kind of speakers that put you to sleep; they’re the kind that wake you up, make you think, make you want to do great things.

Every year, there’s a theme, but interpretations of it are anything but conformist. In addition to the powerful program, there are interactive exhibits all over the building; Vintage Atari games were a hit at our Convergent Technologies station. Sincere thanks to Katie Leckenbusch for her idea and assistance getting the booth together, and congratulations to TEDx Greenville organizer Russell Stall and his awesomely energetic crew of volunteers.

As proud sponsors of the conference, Convergent Technologies’ own crew enjoyed being behind the scenes. TED talks about technology, entertainment, and design. We’re taking it a few syllables further by saying it’s a community-minded, avant-garde approach to business, much like our own. If you think this is an idea worth sharing—or experiencing—pass this along on social media and visit tedxgreenville.com.

Rick Gregson, Founder and Senior Consultant at Convergent Technologies, took the stage at Greenville’s Warehouse Theatre Thursday night–well, technically, he was near the stage, and he definitely was not acting!

As an ardent fan and sponsor of Warehouse productions, Gregson and his associates were invited to preview the world premiere of “Power of Sail,” a riveting drama crafted by screenplay scribe and playwright Paul Grellong. Prior to the performance, Gregson joked about the irony of an IT specialist addressing an audience of theatre patrons. The owner of a company that specializes in data migration, his love for live performances began several years ago when he noticed the way shows engaged his children.

“At this point in my professional life, the technical pieces are relatively easy. It’s the human aspect you have to consider when you’re dealing with any type of transition a company and its people may be going through,”Gregson said. “In a roundabout way, the arts community in Greenville helped shape who I am as a person and what Convergent is as a company.”

Critics are calling “The Power of Sail” an unpretentious commentary on the battles of modern society. Gregson added to that, “I won’t give the plot away, but it’s got some controversial issues. It doesn’t take sides; it just makes us think–and it’s entertaining at the same time.”

“The Power of Sail” will be at the Warehouse Theatre through March 31. Show times and tickets are available at warehousetheatre.com.

Many thanks to Make-A-Wish SC for a fantastic time at the Wish Ball – an amazing event and fundraiser with moving stories of brave kids, their families and what can happen when wishes come true.  It’s a privilege to be a part of this mission.

Joining me were my children, Alleigh and Zachery Gregson, as well as Chase Campbell, DeAndre Wright, Spencer Mehr, and Anna Johnson. 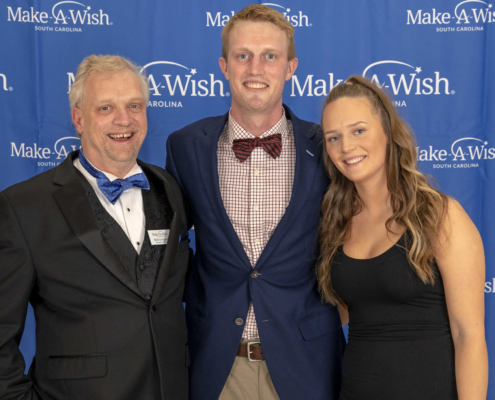 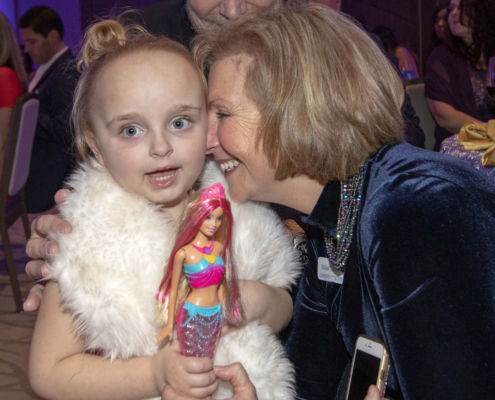 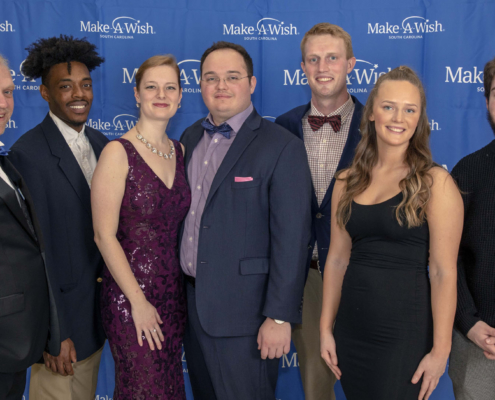 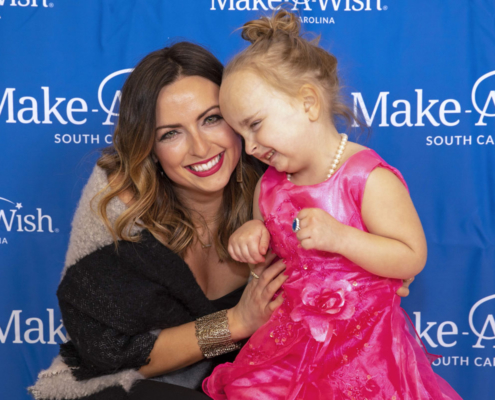 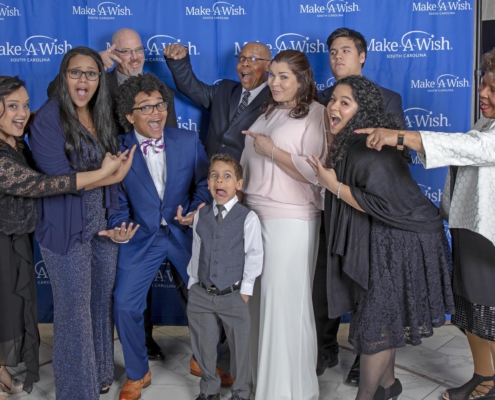 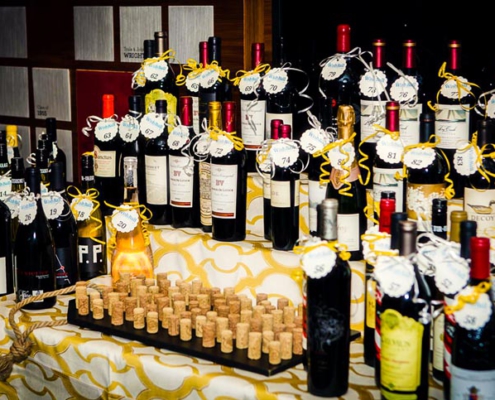 When I first moved to Greenville, I was looking for something to do with my children, and I quickly realized that live performances, whether outdoors in the park or inside the Warehouse Theatre, engaged them and gave us memorable quality time together.

Convergent Technologies has since sponsored multiple Warehouse productions and become a proud patron of the local arts scene and our Upstate community.

This spring, Convergent will sponsor the “Power of Sail,” which runs March 15-31. I am very excited about this upcoming performance and hope you will join my family and me in support of the Warehouse Theatre.